The Stockport Garrick Theatre was founded on 24th of October, 1901, by engineer Edwin Heys and his fellow actors: fugitives from the disbanded dramatic society of Stockport Unitarian Church.Meeting in what was then The Church Coffee Tavern on St Petersgate, Heys and his friends resolved to found a new society ‘to perform the best plays by the most capable amateur actors and with the finest scenic effects’. 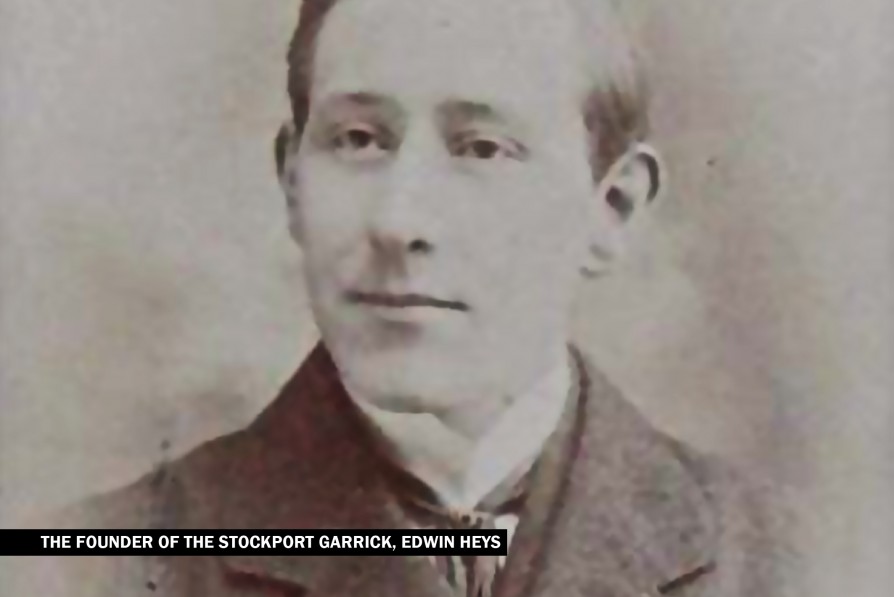 The new society was named after the great actor David Garrick and has remained in the centre of Stockport ever since.Those founding principles have driven the theatre through over a century of diverse and ambitious drama. From its early years, the Garrick made adventurous use of its amateur status, staging challenging works by Ibsen and Bernard Shaw at a time when these playwrights were considered seriously risky on the professional stage, and performing plays censored by the Lord Chamberlain as early as 1909. The theatre kept its doors and its curtains open throughout both World Wars, and attracted the admiration and support of numerous luminaries in the world of professional theatre, including theatre manager Annie Horniman, actor-manager Charles Charrington and his wife, actress Janet Achurch.

As well as presenting a full season of plays each year, Garrick productions have been performed in venues around the country and internationally over the decades. The theatre’s local operations have included charity performances in Buxton and elsewhere, and participation in the Royal Exchange Festival of Amateur Drama, and have also led to the formation of the Altrincham Garrick and the Carver Theatre in Marple. Further afield, the Garrick has performed at the Minack in Cornwall, and in Ireland, Germany and the United States. The society has also run a thriving Youth Theatre for over half its life, which currently produces a full show every year.

The society purchased its current building, an old mill occupied by an assortment of small businesses, in 1920 (see image above). Since then, the building’s labyrinthine interior has undergone various refurbishments to enhance the society’s ability to produce theatre to the highest standards possible. The most recent work is a complete rebuilding of the theatre bar in summer 2010, providing a welcoming and modern environment for patrons. This also incorporates a space for studio theatre performances, with the aim of broadening the range of drama the theatre can produce and increasing its engagement with new writing.It is the Garrick’s early ownership of its own theatre space that qualifies it as England’s oldest Little Theatre, a status that was celebrated in 2008 by the unveiling of a plaque by President of the Little Theatre Guild, Sir Ian McKellen. This plaque can be seen on St Petersgate, at the site of the coffee house in which the society was founded (now a bank), within sight of the building where the ambitions of Edwin Heys and his co-founders continue to inspire a full season of high quality drama every year. 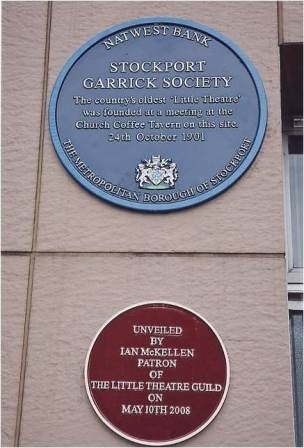 Sir Ian McKellen visited Stockport Garrick Theatre on the 10th of May 2008 to commemorate the theatre’s foundation and celebrate its status as England’s oldest little theatre. As Patron of the Little Theatre Guild of Great Britain, Sir Ian unveiled a blue plaque on the side of NatWest Bank on St Petersgate, site of the Church Coffee Tavern, where the society was founded in 1901. A second plaque, beneath the first, unveiled by the Mayor of Stockport, commemorates Sir Ian’s visit. After the unveiling, Sir Ian gave a question and answer session on the theatre’s stage, describing the stage and auditorium as ‘delightful’. Many of the theatre’s members were themselves delighted to have an opportunity to meet one of British theatre’s best known and most highly accomplished figures.

The Stockport Garrick Society represents an ideal. In its small way it aims to remedy the deficiency of the professional stage, that dearth of purposeful, illuminating, entertaining plays, which under the commercial system are still-born...Query - why should drama alone of all the arts be condemned to make money A meaningless play isn't worth while. Life is too short to be wasted. Edwin Heys, from the membership Newsletter, 1917.

'The Stockport Garrick is usually cited as the most important of the early twentieth century amateur dramatic societies for three good reasons. It was the first civic amateur club to acquire its own playhouse in 1905. It helped to stimulate a revival of artistically inclined theatre in the north-west more generally, including the important work of Annie Horniman's Manchester repertory company at the Gaiety. (opened in 1907 and later to become The Library Theatre) and it was the first amateur group to stage plays by Ibsen and Shaw.' From Shakespeare in Performance, edited by Estelle Rivier & Eric C. Brown